June 10, 2014
No one likes to have to deal with unwanted events - accidents, much less the major ones! For one thing, workplace accidents, no matter how minor, spell doom for the corporate pocket. They simply are downgrading events with little or no redeeming features. They come in in all shapes and sizes, and can occur at anytime of day or night. Clearly, this underlines a need to meet them head on with concrete response plans long before reality hits. The prime objective of ER planning should be mitigation of the resultant effects of an occurrence.

It is therefore of utmost importance to make such plans as simple and as clear as possible - short and sharp, as some might say. Clarity in terms of roles and responsibilities; simple and direct as can be, in terms of sphere of influence or field of command. Plans must be such that each segment dovetails seamlessly into the next, or confusion and shirking of responsibility will reign supreme come the day. There's no greater escalatory factor in an emergency response situation than uncertainty and unclear boundaries of authority.

If responders are unsure of what to do, when, where, why and with whom, a greater proportion of useful response time will be spent arguing, pondering, head-scratching, and generally ducking behind pulling ranks and other bully tactics. So get away from all that. Define each person's role and responsibility as best as possible, delineate the interfaces, underscoring integration for the common purpose of safely wrestling the event to the ground as quickly as possible. Remember, minimum impact on people, asset and the environment should be the overall focus of all responders, from the incident commander to the last person down-the-line.

But keep it in mind that ER Plans are worthless if not carried through with adequate training and repeated schedules of practice to test capacity and competence. For at the end of the day, speed and efficiency of response determines the overall effect on mitigation.

Safety is no joking matter. 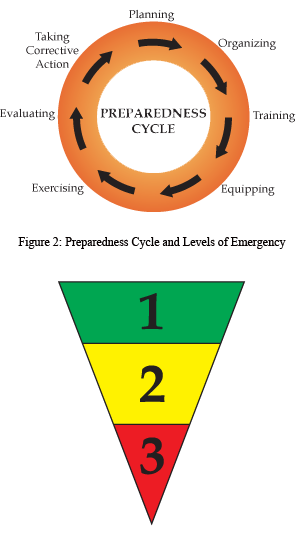 Popular posts from this blog

THAT 5-MINUTE PEP TALK BEFORE THE JOB

Over the years, I've had the privilege of observing pep talks all day long on seismic crews, construction sites, production platforms, processing plants, wire line, drilling operations, rig moves and so on. But not once have I left not feeling maybe the crew could have done better with the shape and content of the core messages thereof. This is because I am of the view that safety messages are only helpful if they are clear and to the point, with little or no ambiguity, if any at all. Unfortunately, this is not always the case.

Now 5-minutes is not a great deal of time for even the most gifted and skillful of speakers to nail  home  the key safety dos and don'ts of the job soon to commence. So most of these talks frequently average out to be sing songs and prayerful affairs in the end, with generalized 'messages' like be 'your brother's keeper', 'safety is everybody's business', 'you all know what…
Post a Comment
Read more

HOW MUCH DOES A NEAR MISS INCIDENT COST?

November 12, 2014
In 'ACCIDENT IS MONEY DOWN THE DRAIN', we tried illustrating  how a NOTHING HAPPENED near miss incident of a hammer accidentally slipping off a technician's grasp, falling through a considerable height and landing safely between two busy foremen, with no damage to property or injury to anyone on site resulted in so much useful production time loss. A conservative computation of the time-cost estimate showed what seemed to be a 'harmless' incident costing the site company management a hefty 3.4 Man-Days lost time in direct costs! The exercise ended without considering the 'POTENTIAL' of the occurrence.

'POTENTIAL' simply refers to the probability of a much more consequential outcome by chance or slightly altered circumstances given the number of people exposed to the threat at the time. This is usually what constitutes the difference between a 'NOTHING HAPPENED' incident, a disabling/ serious property damage one or a fatality. That the people…
Post a Comment
Read more

How Much of Your Opex Do You Save Cutting Corners?

March 15, 2017
What % of your operating budget do you save when you look the other way while unauthorized changes and deviations are a norm in the workplace under your supervision? Would you 5, 10, 15 or maybe 30%? You are not too sure how much, if anything at all?


Well, it is highly unlikely that you will ever save on your Opex if employees are free to make up their own rules as they go along or can decide which step on the job comes next instead of what the approved procedures say. In fact working with scant regards for the Right Way of doing things condemns you to an ever spiraling  operating budget spend. Because you'll find that you are constantly grappling with 'digging a hole to fill a hole' throughout the life of  the project.


In the end, there are no prizes for guessing that your project will come in grossly over budget and way outside the delivery schedule because of all the issues of rework, unplanned stoppages, delayed logistics, repairs and replacements, backtracking, clea…
Post a Comment
Read more